The Bernard Osher Foundation, headquartered in San Francisco, was started in 1977 by Bernard Osher, a respected businessman and community leader. The Foundation seeks to improve quality of life through support for higher education and the arts.

The Foundation provides post-secondary scholarship funding to colleges and universities across the nation, with special attention to reentry students. It also supports a national lifelong learning network for seasoned adults. The Osher Lifelong Learning Institutes, operating on the campuses of 122 institutions of higher education from Maine to Hawaii and Alaska, have a National Resource Center at Northwestern University. In addition, the Foundation benefits programs in integrative medicine in the United States and Sweden, including centers at the University of California, San Francisco; Harvard Medical School and Brigham and Women’s Hospital in Boston; the Karolinska Institute in Stockholm; Northwestern University; Vanderbilt University; the University of Miami; and the University of Washington. Finally, an array of performing arts organizations, museums, and educational programs in Northern California and in Mr. Osher’s native state of Maine receive Foundation grants.

The Foundation has a nine-member Board of Directors, chaired by the Honorable Barbro Osher, Honorary Consul General of Sweden in California.

Barbro Osher, Chairman of the Board 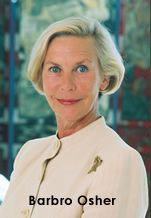 Barbro Osher is Consul General of Sweden in San Francisco, having served in the same capacity in Los Angeles from 1995-1998. She is also the former owner and publisher of Vestkusten, one of the few Swedish-American newspapers in the United States, established in 1886 and providing news from Sweden on politics, business, and sports as well as information on the active Swedish-American community in the West.

A native of Stockholm and a graduate of Stockholm University with a degree in languages and political science, Osher pursued a career in publishing and advertising in Sweden before moving to the United States in the early 1980s. Her first visit to America in 1962 was to Maine where she participated as a student in the Experiment in International Living program. Over the years, she has represented both the Royal Swedish Academy of Engineering Sciences and the Swedish Tourist Board.

Barbro Osher is the founder of the Swedish Women's Educational Association (SWEA) chapter in San Francisco and was president of Positive Sweden/North America, an organization furthering the image of Sweden through educational activities in the United States. She serves on the Boards of the University of California (Berkeley) Foundation and the American-Scandinavian Foundation.

Among numerous recognitions, including several American honorary degrees, Osher received the Eliason Award from the Swedish American Chamber of Commerce of Greater Los Angeles in 1999. She was a recipient of His Majesty the King's Medal in 2002. In 2004 Barbro Osher was named SWEA International's Woman of the Year, and in October, 2006, she was awarded an honorary doctorate in art from Goteborg University, Sweden. Barbro Osher was named Swedish-American of the Year for 2008 by the Vasa Order of America in agreement with the Swedish Department of Foreign Affairs.

Barbro Osher is chair of the Bernard Osher Foundation and president of the Barbro Osher Pro Suecia Foundation. The Pro Suecia Foundation supports Swedish-related cultural and educational projects in North American and Sweden. Among the Foundation's grantees are several American universities, including the University of California at Berkeley, Gustavus Adolphus University, and the University of Texas at Austin, whose programs advance understand of Swedish culture and tradition both in Sweden and in America. She is also a very active member of the Consular Corps of San Francisco, an avid reader in six languages, and an enthusiastic skier. 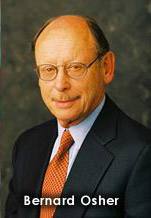 Bernard Osher, a patron of education and the arts, is well known as "the quiet philanthropist." He created the Bernard Osher Foundation in 1977 which seeks to improve the quality of life through support for higher education and the arts. The Foundation provides postsecondary scholarship funding to colleges and universities across the nation. The Foundation also supports selected centers in integrative medicine at Harvard University, the University of California, San Francisco, and the Karolinska Institute in Stockhom, Sweden. In addition, the Foundation supports a growing national network of lifelong learning institutes for older adults. The Osher Lifelong Learning Institutes, operating on the campus of 120 colleges and universities from Maine to Hawaii, have a National Resource Center at the University of Southern Maine. A local grants program provides support for arts and humanities institutions in the Great San Francisco Bay Area and the State of Maine.

A native of Biddeford, Maine and a graduate of Bowdoin College, Osher has pursued a successful career in business, beginning with the management of his family's hardware and plumbing supplies store in Maine and continuing with work at Oppenheimer & Company in New York before moving to California. There he became a founding director of World Savings, the second largest institution in the United States, which was recently merged with Wachovia Corporation.

A collector of American paintings of the mid-19th to the mid-20th centuries, Osher purchased the fine art auction house of Butterfield & Butterfield in 1970 and oversaw its growth to become the fourth largest auction house in the world. In 1999, he sold the company to eBay.

Having served on a number of philanthropic and non-profit boards, Osher is an active community leader in the San Francisco Bay Area, the recipient of several honorary degrees, a serious student of opera, and an ardent fly fisherman. 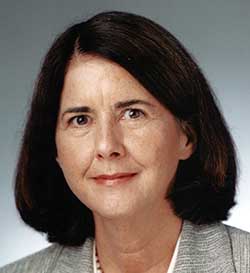 Bitterman currently is a director (and Chairman) of the Public Broadcasting Service (PBS), The Bernard Osher Foundation, Bank of Hawaii, Barclays Global Investors, and the Commonwealth Club of California. She has produced several documentaries for public television and has written on telecommunications development and role of media in developing societies. She is an Honorary Member of the National Presswomen's Federation and a Fellow of the National Academy of Public Administration. Bitterman received her B.A. from Santa Clara University and her M.A. and Ph.D from Bryn Mawr College.